Nineteenth-century farmers and market gardeners had much practical knowledge about using manures and making composts that worked like fertilizers, but little was known about the actual microbial process of composting until our century. As information became available about compost ecology, one brilliant individual, Sir Albert Howard, incorporated the new science of soil microbiology into his composting and by patient experiment learned how to make superior compost.

During the 1920s, Albert Howard was in charge of a government research farm at Indore, India. At heart a Peace Corps volunteer, he made Indore operate like a very representative Indian farm, growing all the main staples of the local agriculture: cotton, sugar cane, and cereals. The farm was powered by the same work oxen used by the surrounding farmers. It would have been easy for Howard to demonstrate better yields through high technology by buying chemical fertilizers or using seed meal wastes from oil extraction, using tractors, and growing new, high-yielding varieties that could make use of more intense soil nutrition. But these inputs were not affordable to the average Indian farmer and Howard’s purpose was to offer genuine help to his neighbors by demonstrating methods they could easily afford and use.

In the beginning of his work at Indore, Howard observed that the district’s soils were basically fertile but low in organic matter and nitrogen. This deficiency seemed to be due to traditionally wasteful practices concerning manures and agricultural residues. So Howard began developing methods to compost the waste products of agriculture, making enough high-quality fertilizer to supply the entire farm. Soon, Indore research farm was enjoying record yields without having insect or disease problems, and without buying fertilizer or commercial seed. More significantly, the work animals, fed exclusively on fodder from Indore’s humus-rich soil, become invulnerable to cattle diseases. Their shining health and fine condition became the envy of the district.

Most significant, Howard contended that his method not only conserved the nitrogen in cattle manure and crop waste, not only conserved the organic matter the land produced, but also raised the processes of the entire operation to an ecological climax of maximized health and production. Conserving the manure and composting the crop waste allowed him to increase the soil’s organic matter which increased the soil’s release of nutrients from rock particles that further increased the production of biomass which allowed him to make even more compost and so on. What I have just described is not surprising, it is merely a variation on good farming that some humans have known about for millennia.

What was truly revolutionary was Howard’s contention about increasing net nitrates. With gentle understatement, Howard asserted that his compost was genuinely superior to anything ever known before. Indore compost had these advantages: no nitrogen or organic matter was lost from the farm through mishandling of agricultural wastes; the humus level of the farm’s soils increased to a maximum sustainable level; and, the amount of nitrate nitrogen in the finished compost was higher than the total amount of nitrogen contained in the materials that formed the heap. Indore compost resulted in a net gain of nitrate nitrogen. The compost factory was also a biological nitrate factory. 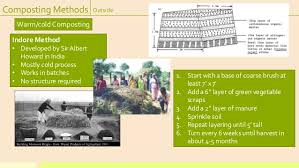 Howard published details of the Indore method in 1931 in a slim book called The Waste Products of Agriculture. The widely read book brought him invitations to visit plantations throughout the British Empire. It prompted farmers world-wide to make compost by the Indore method. Travel, contacts, and new awareness of the problems of European agriculture were responsible for Howard’s decision to create an organic farming and gardening movement.

Howard repeatedly warned in The Waste Products of Agriculture that if the underlying fundamentals of his process were altered, superior results would not occur. That was his viewpoint in 1931. However, humans being what we are, it does not seem possible for good technology to be broadcast without each user trying to improve and adapt it to their own situation and understanding. By 1940, the term “lndore compost” had become a generic term for any kind of compost made in a heap without the use of chemicals, much as “Rototiller” has come to mean any motor-driven rotarytiller.

Howard’s 1931 concerns were correct, almost all alterations of the original Indore system lessened its value, but Howard of 1941 did not resist this dilutive trend because in an era of chemical farming any compost was better than no compost, any return of humus better than none.

Still, I think it is useful to go back to the Indore research farm of the 1920s and to study closely how Albert Howard once made the world’s finest compost, and to encounter this great man’s thoughts before he became a crusading ideologue, dead set against any use of agricultural chemicals. A great many valuable lessons are still contained in _The Waste Products of Agriculture. _Unfortunately, even though many organic gardeners are familiar with the later works of Sir Albert Howard the reformer, Albert Howard the scientist and researcher, who wrote this book, is virtually unknown today.

At Indore, all available vegetable material was composted, including manure and bedding straw from the cattle shed, unconsumed crop residues, fallen leaves and other forest wastes, weeds, and green manures grown specifically for compost making. All of the urine from the cattle shed-in the form of urine earth, and all wood ashes from any source on the farm were also included. Being in the tropics, compost making went on year-round. Of the result, Howard stated that:

“The product is a finely divided leafmould, of high nitrifying power, ready for immediate use [without temporarily inhibiting plant growth]. The fine state of division enables the compost to be rapidly incorporated and to exert its maximum influence on a very large area of the internal surface of the soil.”

Howard stressed that for the Indore method to work reliably the carbon to nitrogen ratio of the material going into the heap must always be in the same range. Every time a heap was built the same assortment of crop wastes were mixed with the same quantities of fresh manure and urine earth. As with my bread-baking analogy, Howard insured repeatability of ingredients.

Any hard, woody materials, Howard called them “refractory”, must be thoroughly broken up before composting, otherwise the fermentation would not be vigorous, rapid, and uniform throughout the process. This mechanical softening up was cleverly accomplished without power equipment by spreading tough crop wastes like cereal straw or pigeon pea and cotton stalks out over the farm roads, allowing cartwheels, the oxens’ hooves, and foot traffic to break them up.

Decomposition must be rapid and aerobic, but not too aerobic. And not too hot. Quite intentionally, Indore compost piles were not allowed to reach the highest temperatures that are possible. During the first heating cycle, peak temperatures were about 140 degree. After two weeks, when the first turn was made, temperatures had dropped to about 125 degree, and gradually declined from there. Howard cleverly restricted the air supply and thermal mass so as to “bank the fires” of decomposition. This moderation was his key to preventing loss of nitrogen. Provisions were made to water the heaps as necessary, to turn them several times, and to use a novel system of mass inoculation with the proper fungi and bacteria. I’ll shortly discuss each of these subjects in detail. Howard was pleased that there was no need to accept nitrogen loss at any stage and that the reverse should happen. Once the C/N had dropped sufficiently, the material was promptly incorporated into the soil where nitrate nitrogen will be best preserved. But the soil is not capable of doing two jobs at once. It can’t digest crude organic matter and simultaneously nitrify humus. So compost must be finished and completely ripe when it was tilled in so that:

“. . . there must be no serious competition between the last stages of decay of the compost and the work of the soil in growing the crop. This is accomplished by carrying the manufacture of humus up to the point when nitrification is about to begin. In this way the Chinese principle of dividing the growing of a crop into two separate processes, (1) the preparation of the food materials outside the field, and (2) the actual growing of the crop-can be introduced into general agricultural practice.”

And because he actually lived on a farm, Howard especially emphasized that composting must be sanitary and odorless and that flies must not be allowed to breed in the compost or around the work cattle. Country life can be quite idyllic, without flies.