Source: Kitchen Gardens SA
An initiative of the Botanic Gardens of South Australia
Beans have been grown in tropical and subtropical regions for millennia, and provide an important staple food.
There are numerous species and dozens of varieties. Only those most suitable for growing in southern Australia are described here. Pods are usually eaten immature as a green vegetable, but immature pods can be shelled, cooked and eaten like peas, or allowed to mature and the dried beans stored. The dried seeds are nutritious, containing up to 10% protein.
Most beans are grown during the warmer months from spring through to early autumn. The only exception is broad beans which are grown from autumn through to spring.
Varieties
Butter beans (Phaseolus lunatus)
Butter beans produce sweet and tender, golden yellow, often flattened pods with a waxy sheen. Bush varieties include ‘Bountiful’, ‘Cherokee’ and ‘Majestic’. ‘Sunglow’ is a vigorous climber. 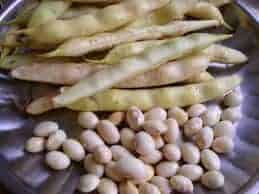 French beans (Phaseolus vulgaris)
These beans, also called common or garden beans, are the most widely grown beans. They occur as dwarf (stick or bush) and climbing varieties. Climbing varieties take a little longer to begin cropping but produce more pods over a longer period. Varieties grown for their dried seeds are called haricot beans.
Dwarf stringed beans
‘Royal Windsor’ or ‘Windsor Long Pod’ produce prolific crops of long, straight fleshy pods, even in cool weather.
‘Brown Beauty’ performs well in hot weather and will crop heavily for three weeks or more if picked regularly.
‘Hawkesbury Wonder’ sets well in cooler conditions and is suited to later sowing. All french beans are stringless if picked young enough. They then need only to be topped and tailed.
Dwarf stringless beans
‘Pioneer’ or ‘Redlands Pioneer’ produce excellent quality, fleshy pods and can be sown throughout the season. They thrive in hot humid conditions, and are resistant to bean rust. ‘Gourmet’s Delight’ is similar to ‘Pioneer’ but is better suited to later sowing.
‘Snapbean’ produces good crops of round, very fleshy, stringless pods and is disease resistant for wet or dry locations. ‘Wholepod’ produces prolific crops of slender 10cm pods on strong compact bushes is excellent for growing in small spaces and pots and can be eaten whole. Pick while young and tender to maintain cropping. ‘Rapier’ is like ‘Wholepod’ but with more rounded pods.
Climbing beans
‘Purple King’ is an old favourite with good crops of bluish-purple, flattened pods that turn green when cooked. It
performs well during dry summers. ‘Epicure’ produces good crops of well- shaped, flattish, almost stringless pods, even during hot weather. ‘Westralia’ produces dark green, flattened, stringless, fleshy pods up to 25cm long on a dense, rust resistant vine. ‘Blue Lake’ produces large crops of big, fleshy, stringless pods over a long period and is best suited to a milder climate. ‘Giant of Stuttgart’ produces heavy crops over a long period of excellent tasting, stringless pods on vigorous bushes to 2-3 m in height.

Dried or haricot beans
These are varieties of french beans grown for their ripe seeds. ‘Borlotti’ and ‘Carmine King’ produce colourful red and yellow pods on 1.5-2m plants. Seeds are white with red flecking and used either at the mature, green stage or as dried beans. ‘Red Kidney’ produces large kidney shape beans with red to mahogany seeds on bushes to 1 m tall.
Lablab (Dolichos lablab)
Also called seven year bean or hyacinth bean, lablab is a woody perennial climber of Asian origin grown there mainly as a forage and green manure crop. A vigorous grower, it has trifoliate leaves, mainly purple flowers and purple to yellow pods that can be eaten as a green vegetable or as ripe seeds. Although a perennial, it is best sown fresh each year from seed in mid spring.
Lima beans (Phaseolus lunatus var. macrocarpa syn. Phaseolus limensis)
Also called Madagascar beans, Lima beans are grown for their seeds which are used semi-mature (green limas) or dry (dry limas). They occur as baby lima with small thin seeds and large limas with the more usual large, thick seeds.
Runner beans (Phaseolus coccineus)
The runner bean is a cool climate perennial plant often grown as an ornamental creeper for its large, brilliant red flowers. It will flower well in most parts of southern Australia, but satisfactory crops of beans will set only in cooler hills and southern areas. Runner bean pods are short and broad with a rough textured skin. They are crisp and tender when young with excellent flavour. Runner beans also produce edible tubers on the roots. ‘Scarlet Runner’ is the most common. ‘Zenith’ has fleshy pods 20-30 cm long.
Snake beans (Vigna unguiculata var. sesquipedalis)
Also called asparagus or yard-long beans, these are grown for their 1 cm thick, stringless pods that can grow to 60 cm or more in length although they are usually harvested at 30cm or so. Over mature pods become tougher and less palatable. Snake beans grow well in hot areas, and are available as bush and climbing varieties.

Soybean (Glycine max)
The soybean is the most important food bean in the world and has the highest protein content (up to 10%). It is used to make high protein flour, milk substitute, sauces and beverages. The green pods, half ripe seeds and dried seeds are use as vegetables. Grown in the same way as dwarf french beans, soybean bushes reach 50-60cm. The pods have a rough hairy texture, grow about 7 cm long and contain three or four smooth rounded seeds. There are black, brown, yellow green or white seeded varieties. White seeded varieties are often preferred for cooking.
Growing beans
All beans except broad beans are warm climate vegetables that will not grow under cold, frost-prone conditions. Adequate shelter is essential. Strong wind damages plants, stunts growth and reduces pod set. Plant beans in a protected site, or protect them from the prevailing winds with a windbreak or rows of sweet corn. Beans prefer well- prepared, organic-rich, loams and clay loams with good drainage. Crops grown on very sandy soils need mulching and frequent watering to produce satisfactory crops.
Sowing
Most beans are sown from September to January or February in warmer areas and October to December in

cooler areas. Always follow packet instructions. Climbing beans need support to a height of 2-2.5 m.
Make sure the soil is fully moist. Apply fertilisers as recommended. Place the seed in a bag and add a level teaspoon of fungicide, such as mancozeb or chlorothalonil. Shake the bag to coat seed with fungicide. This will protect seed from rotting until it germinates.
Sow seed at the recommended depth and spacing, cover with soil, lightly firm and mulch with either dry grass clippings or compost. Avoid watering in the first three or four days if possible. Immediate heavy watering often causes seed to take up water too rapidly, resulting in the seed rotting or ‘damping off’ of young seedlings. In hot weather, light sprinklings to maintain surface moisture are acceptable. Bean seed will germinate in 7-10 days from sowing. Climbing beans may be supported in a variety of ways.
Fertiliser
Being legumes, beans supply much of their own nitrogen from nodules on their roots. Use a complete fertiliser lower in nitrogen (for example NPK 4:6:8), or mix a complete fertiliser (for example NPK 8:4:8) and superphosphate in equal proportions. This gives an NPK of 4:6:4 which is quite suitable for beans. Place fertiliser in bands either side of the row 50-75 mm deep either before planting or after seedlings have emerged. Placing fertiliser before planting is easier. Use about 60g of fertiliser to each metre of row and cover with soil before sowing. Direct contact with fertiliser can kill germinating seedlings.
Further side dressings of fertiliser will be needed only when beans are grown in very sandy soil, or when no compost or animal manures have been added.
Watering
Young seedlings will need 5-10 mm (equal to 5-10L to each square metre) of water every two to four days, depending on the weather. As the plants grow, increase this to 10-15 mm. Beans benefit from some overhead watering – the extra humidity increases pollination efficiency and pod set, and suppresses mite infestations.
Maturity, harvesting and storage
Bush beans take 10-12 weeks from sowing to first picking and climbing beans take 12-14 weeks. Always pick green beans when young and tender before the seeds swell. Over mature pods become lumpy and tough. Pick at least once a week, and twice a week in warmer weather. Early harvesting helps prolong flowering and further pod set. Beans store well in the refrigerator – pack in thin, supermarket veg bags. Freezing and drying are alternative for longer term storage as most varieties can be used as dried beans. Simply allow the pods to mature on the bushes. When dry, shell the beans and store dry in containers.
Problems
Pests: Spider mites and greenhouse whitefly can be particular problems. See ‘Pests’ for more information.
Diseases: There are many disease which can afflict beans, but few are problematic in southern Australia where summers are warm and dry. Some root rotting disorders appear when beans are grown on poorly drained soil but these can be overcome with improved drainage and by raising beds or rows. See ‘Diseases’ for more information.
“Permanews” Editor’s Note:
Although this article is written from the perspective of a South Australian Gardener, it contains much useful information. One must of course, make allowances for the differences in our climate when using any of the advice contained. I haven’t included any information on broad beans, because generally they don’t thrive in our sub-tropical climate.