WHAT IS INGA ALLEY CROPPING?
Alley cropping is the growing of crops between rows of trees in the spaces between the rows – the alleys. Inga alley cropping is the growing of crops between rows of Inga trees. The Inga trees are pruned before crops are planted in the alleys. Before they are pruned the trees shut off the light from the alleys so that the weeds die. The pruned leaves and small branches are left in the alleys to rot down to form a mulch that fertilizes the soil. This eliminates the need for chemical fertilizers. The trees then regrow rapidly so the cycle of pruning and planting crops is repeated year after year. The system also provides firewood for cooking, thus taking further pressure off the forests.
This increases yields and maintains the plot’s fertility long term, thus eliminating the need for the continual burning of the rainforest to get new fertile plots (slash and burn or shifting cultivation). Rainforest Saver is supporting Inga projectsin Honduras, Cameroon and Ecuador.
The Inga tree is native to many parts of Central and South America, but has been found to grow well in other parts of the world in the tropical rainforest belt. It makes a good shade tree for coffee and cocoa and has therefore been taken to many tropical countries.
Weed free Inga alley Inga alley showing ground free of weeds and covered in mulch after pruning the trees. (Photo Copyright © FUPNAPIB, Honduras 2006)
The Inga is suitable because it grows well on the acid soils of the tropical rainforest and former rainforest soils,
is a leguminous tree that fixes nitrogen (converts nitrogen into a form usable by plants), has mycorrhizae (special fungi that grow with its roots) that take up phosphorus allowing it to be recycled instead of being washed out from the soil,grows fast, has thick leaves that when left on the ground after pruning form a thick cover that protects both soil and roots from the sun and heavy rain, branches out to a thick canopy so as to cut off light from the weeds below, andwithstands careful pruning year after year. Pruned Inga stems
Pruned Inga stems. (Photo Copyright © FUPNAPIB, Honduras 2006)
For Inga alley cropping the trees are planted in rows (hedges) close together, with a gap, the alley, of say 4m between the rows.
When the trees have grown, usually in about two years, the canopies close over the alley and cut off the light and so smother the weeds.
The trees are then carefully pruned. The larger branches are used for firewood. The smaller branches and leaves are left on the ground in the alleys. These rot down into a good mulch (compost). If any weeds haven’t been killed off by lack of light the mulch smothers them.
The farmer then pokes holes into the mulch and plants his crops into the holes.
The crops grow, fed by the mulch. The crops feed on the lower layers while the latest prunings form a protective layer over the soil and roots, shielding them from both the hot sun and heavy rain. This makes it possible for the roots of both the crops and the trees to stay to a considerable extent in the top layer of soil and the mulch, thus benefiting from the food in the mulch, and escaping soil pests and toxic minerals lower down. Pruning the Inga also makes its roots die back, thus reducing competition with the crops. 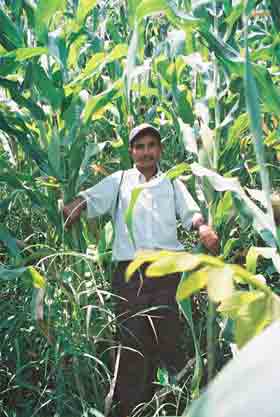 Farmer with tall maize
Pablo, a farmer, in his tall maize crop within his Inga alley. (Photo Copyright © Antony Melville 2007)
Research found that the main reason for the soil losing its fertility with slash and burn farming was that the rain was washing out phosphorus. The special fungi that grow with the Inga roots take up spare phosphorus, which then goes to the roots and into the tree. As the crops grow, so does the Inga. When the crops are harvested the Inga is allowed to grow back. Once more it closes the canopy, is pruned, and the cycle is repeated, time and again. When the tree is pruned the leaves fall on the ground and rot down and phosphorus is released for the crops. The fungi again take up spare phosphorus. Thus the cycle is repeated time and again. An initial application of rock phosphate has kept the system going for many years.
Not only do the farmers grow their basic crops of maize and beans, but also they now grow cash crops with this system. Previously this was not possible because when the plot was a good distance from the farmer’s home he would not have been able to guard it, or give the crops all the attention they might need. But with the same plot being used continuously it can be near his home, thus allowing his family to help to tend and guard it, even when there are young children.