During the Tropical Vegetable Growing workshop I attending with Elizabeth Fekonia in early 2012, I received two Moringa oleifera cuttings from Yandina Community Gardens where the workshop was being held. After having them in pots for a few months (once the leaves began to grow) they were planted on small mounds in clay soil in Aug 2012 on our property in Cootharaba.

A year later the main stems were pruned at about 2m and this is from where new stems grow. (future plants will be cut to about 1m.) In 2015 they produced seeds pods (20 or so) from which I saved seeds.

During 2016 there were no seed pods. The trees hadn’t been pruned the previous year after they seeded. So my question is how to treat the plant to produce seed pods. Is it best to prune it and “stress” it to produce seed? I may prune one of these trees back hard and leave the other untouched to compare. They are however also 4 years old now. See below the first 6 photos show the original 2 plants grown from cutting.

Growing from cuttings
From my experience I use long stems (30cm) with many nodes as the leaves will grow from each node above the soil (see photo below). I plant a stem which is cut just below a node and it’s from here that the roots grow (see other photo). I found that the leaves begin to grow before there is a strong root system.

Once in the ground they do form thick strong roots that look like cassava roots. The base of some of our plants have been scratched by chooks or eroded by water to expose the roots but they still thrive!

Growing from seed
I have grown seeds in pots by either soaking seed for 24 hours before planting or planting direct into pots. If pre-soaked and planted into moist seed-raising mix, then no watering needed until it germinates. I have over-watered and the seeds have rotted. Germination can take up to 2 weeks or more. My overall success rate has been about 50%. Hence the interest to network and learn from one another!

From seed I have learned to sow when the weather warms from September. Plant in tube stock (the longer, bigger ones are best) and leave undisturbed for 1 year. The root ball will form a bark and become hardy for when you transplant it in the next warm season. During the cooler months the stem that would have grown may die completely but be assured that the ball is still under the soil! When the weather warms it will send out new shoots. Then plant it in the ground. In the case where the stem is still intact cut it down to about 3cm from the base, it’ll encourage new shoots to grow from the ball. So you start out with a strong plant with multiple stems! More leaf production!

I encourage you to observe (and make notes or take photos) and let’s share our growing experiences. 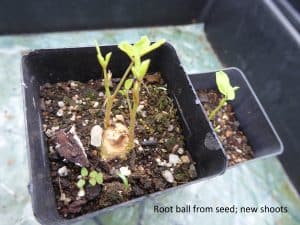