The coconut palm is a tropical plant that originated in Melanesia. The last traces of coconut fossils found in India and New Zealand date back several million years. Coconut spread around the world in several waves. The first occurred thanks to the fact that the fruits float and can therefore cross the sea to populate neighbouring islands. In the Middle Ages, the Arabs set up a substantial trade in the Indian Ocean and enhanced the dissemination of coconuts. In the sixteenth century, European colonists contributed to its spread from the Indian region to West Africa and the west coast of America.
The fruit was just called ‘coco’ until the seventeenth century, but the word ‘coconut’ subsequently prevailed. The word ‘coco’ comes from a Portuguese term that meant monkey face, referring to the appearance of the nut.
Botany

The coconut palm, Cocos nucifera, is a member of the Araceae or Palmaceae family. Like all members of this family, the coconut has palms (pinnate leaves). The species name nucifera is from the Latin nux (nut) and fero (to bear): nut-bearing. In spite of their appearance, coconut palms are not trees in the botanical sense of the term but giant herbs that can grow to a height of 30 metres. Reference is not made to the ‘trunk’ but the ‘stipe’, formed by the healing of points of section of palms shed in preceding years. The stipe has a single terminal bud that continuously shoots palms up to 7 metres long. They are arranged in a spiral, forming the crown of the palm tree. The number of bunches of nuts can be determined by counting the leaves as there is an inflorescence in the axil of each palm. The latter consists of about forty spikelets each bearing male and female flowers. The mode of reproduction varies according to the species.
The coconut palm fruits all the year round and the fruits reach maturity after 11 to 12 months. Each palm produces 50 to 150 nuts each year. Coconut palms are herbaceous and can bear fruit for more than 100 years but the maximum is generally reached after 10 to 20 years.
The fruit is an ovoid or ellipsoid drupe weighing 1.5 kg on average. It contains a single seed, the coconut, that forms some 60% of total fruit weight. Coconuts sold by retailers display fibres that are the remains of a thick husk that has been removed (dehusking). A second, very thin envelope covers the husk, forming a smooth green, orange, yellow or ivory skin.
Young nuts contain much coconut water and a thin, white gelatinous coating on the inner surface of the nut. As the nut ripens, the coating becomes thicker and solidified, giving a very white pulp (the ‘meat’). Various extraction techniques are used to obtain different oily by-products: copra, milk, cream and oil.

Ecology of the coconut palm

The coconut palm is a very familiar plant in humid tropical regions. It adapts fairly well to climatic conditions and is so appreciated in certain countries that it is found beyond its ecological niches. Cultivation of coconuts requires substantial light and the optimal temperature for growth of the palms is 27°C, with extremes of 13°C and 35°C. Although most coconut palms are planted at an altitude of less than 500 metres, they can nonetheless do well above 1000 metres although low temperatures compromise growth and yields. Coconut palms generally grow in regions where precipitation is distributed evenly throughout the year and totals some 1 500 to 2 500 mm and where relative humidity is high. This is why they are found in particular in coastal zones that are temperate and where sea winds bring high humidity.
The coconut palm has leathery semi-xerophile leaves and can withstand drought periods lasting for several months. However, insufficient water may cause the abortion of flowers, premature fruit fall and a decrease in the size of the nuts.
The coconut palm is very adaptable as regards soils as it can grow in marginal zones and even those that are unsuitable for other crops. Palms are thus found in highly saline sandy soils, acid sulphate mangrove soils and deep peat soils. Salt has a beneficial effect on the size of coconuts.
The slender stipes and long pinnate leaves mean that these palms can resist strong winds and even hurricanes.

The tree with a hundred uses or the Tree of Life

Coconut palms have many uses both for local populations and in developed countries.
The wood is used in making sculptures, handles for tools, domestic utensils, piles for houses, bridges, boats, flooring and furniture.
The inflorescences are incised to tap sweet sap served as a beverage (called ‘toddy’ in India). Fermented, this gives palm wine with a low alcohol content but that can be distilled to make stronger ‘arak’. Coconut vinegar is made from palm wine.
Palm leaves are used for roofing. They are plaited to make mats, hats, brooms, baskets, fans and geotextiles. Husk fibres are used to make matting, doormats, brooms, ropes, mattresses, horticultural substrates and even car seats.
White and tender palm hearts (also called ‘palmito’, ‘burglar’s thigh’, ‘chonta’, ‘palm cabbage’ or ‘swamp cabbage’) are a much-appreciated food. Coconut shells are used as recipients and also have industrial uses such as the manufacture of active carbon for filtering gases and vapours (cigarette filters, filters for certain nuclear radiation, etc.). The coconut palm is also used for fuel as it is or as charcoal, and palm ash is used as a fertiliser.
Young coconuts provide a refreshing, thirst-quenching drink. Coconuts form a plentiful food supply and are usually the main source of vegetable oil for the populations of atolls. The pulp can be eaten raw or processed. It is dried to form copra that is pressed to obtain coconut oil.
Production of coconut oil is nearly 2.1 million tonnes a year and is No. 7 in world vegetable oil sales. First pressure oil is used in food products. However, hot-processed oil is used to make soap, shampoo, cosmetics, detergent, paint and pharmaceuticals. Many names are used for it in the food industry: Végétaline®, copra oil, etc.; it is also used in the manufacture of margarine. In addition to its taste qualities, this oil is also appreciated for its ability to remain solid at high temperatures (24°C) thanks to its saturated fatty acid composition. Coconut is used in the food industry to flavour pastries, biscuits, chocolate, dairy products, ice cream, etc.
Coconut milk and coconut cream are made by pressing a mixture of fresh grated albumen and water. It is a traditional ingredient in several African and Asian dishes and is used increasingly in Northern countries. The roots and milk of young palms and coconut oil are also considered to have medicinal virtues. The palm is also used as an ornamental plant. The gracious crown and slightly inclined trunk make it a symbol of the tropics.

Varieties and mode of multiplication

There are thought to be more than 400 traditional varieties of coconut in the world. Two ancestral lines probably formed the base of this varietal richness. The ‘Niu Kafa’ type has elongated triangular fruits with a thick husk, floats easily and germinates slowly and is though to have been disseminated by marine currents. ‘Niu Vai’ has round fruits and a thicker husk. It does not float as easily, it is early and rich in liquid albumen. It was probably cultivated and then disseminated by navigators. Repeated crosses between the two lines gave the various coconut cultivars seen today.
The varieties can be classified simply in two large groups: ‘dwarf’ and ‘tall’. More than 95% of the palms grown in the world belong to the second group. The main cultivars are ‘Malaysia’, ‘Rennel’, ‘ Vanuatu’, ‘Jamaica’, ‘West African’ and ‘East Africa’. This type of palm can grow to 30 metres, bears large nuts but does not fruit until it is 5 to 7 years old. The dwarf type is rarer and has a more slender trunk, a more rapid succession of inflorescences and fruits earlier (after two years). The most common varieties include ‘Malayan Yellow Dwarf’, ‘Brazilian Green Dwarf’, ‘Ghana Yellow Dwarf’ and ‘Equatorial Guinea Green Dwarf’.
Dwarf x Tall crosses (hybrid varieties) can combine or even amplify the agronomic advantages of the two groups. Results of research in Côte d’Ivoire show that 35 of out of 135 hybrids tested produced 65% more than the standard ‘West African’ tall variety. Some even yield twice as much, such as ‘PB 12’1 (hybrid of ‘Malayan Yellow Dwarf’ x tall ‘West African’) which has been widely planted in South-East Asia. It is estimated that hybrid varieties form 15% of all the coconut palms planted in the last ten years. They include the ‘KB’ and ‘KINA’ series from Indonesia, the ‘PCA 15’ series from the Philippines and the ‘PB’ (such as ‘PB 121’) from Côte d’Ivoire.
Coconut palms are generally multiplied using seeds. They are grown in nursery seedbeds or in polybags with regular applications of fertiliser. The seedling are planted out after 5 to 7 months. 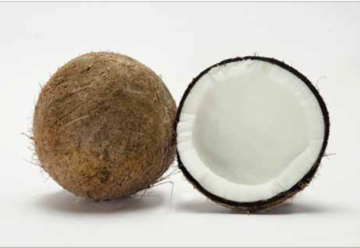 Coconut is targeted by numerous pests and diseases that cause varying degrees of damage. One of the diseases that forms the greatest threat to production is ‘lethal yellowing’. Caused by a phytoplasma (bacterium), it results in depigmentation of the palms, premature nut drop, the death of the single bud and finally of the palm itself. Kerala wilt in India and cadang-cadang in the Philippines are serious viral diseases. The conditions of cultivation of coconuts are ideal for the development of certain fungal pathogens such as Phytophthora palmivora, Ganoderma boninense, Pestalotia palmarum, etc.
Pests include numerous insects such as beetles ( Oryctes monoceros in Africa, Promecotheca spp., Brontispa longissimo, Rhynchophorus spp. in Asia and the Pacific). Biological control with Bacillus thuringiensis can be used to control caterpillars ( Hidari irava, Latoia pallida, etc.) that eat young shoots. Bugs ( Pseudotherapus wayi in East Africa and Pseudotherapus devastans in equatorial Africa) attack flowers and young fruits and can be managed using weaver ants, their worst natural enemy ( Oecophylla longinoda in Africa and Oecophylla smaragdina in Asia and the Pacific). Damage by termites must also be prevented in nurseries and in young plantations. Coconuts are generally picked directly from the palms to prevent production losses caused by rats and thefts in the plantations. In some countries, bamboo canes 25 metres long are used; they have a knife at the end to detach ripe bunches. In Thailand, some farmers use trained monkeys ( Macacus nemestrina) that become true agricultural workers as they can gather up to a thousand nuts a day!