One of the most potent and exemplary designs of tropical permaculture is the banana circle. It has multiple functions that include the following but are not limited to them just as Bill Mollison once said: (the yield is theoretically unlimited, it is only our imagination and information that does) The banana circle is a relatively easy design feature to construct and quickly planted out with cuttings and root division. When constructed correctly it serves mainly as a spot to cycle the constant flow of organic matter that is dropping from the jungle and coming out of the homes there.

Culturally, people like to keep their grounds clean (fear of snakes and such but also tradition of northern Europeans to scrape off all the organic matter and burn it) which necessitates a place to recycle the abundant organic material. Burning the material solves nothing holistically but a banana circle results in food and biomass at the very least. Bananas are very hungry plants and will thrive off the abundant cycling of organic material as well as the moisture inherent in its design.

The Process of Construction Step one is to lay out the circle in relative location so that it can perform many functions. It again may connect to the house via a sink or waste stream so site it appropriately. They are usually dug on relatively flat ground but a slight slope should not affect it at all. From there you will peg out the inner and outer circle with dimensions roughly but not always from the below drawing. They can get bigger or smaller but for access we have found this to be roughly the best dimensions. The 2 meter wide depression allows for ample water storage and composting area but not big enough where the constant flow of materials will not keep the depression without material. The material should be kept in a convex shape within the concave shape to keep the mosquito’s at bay if there happens to be standing water. 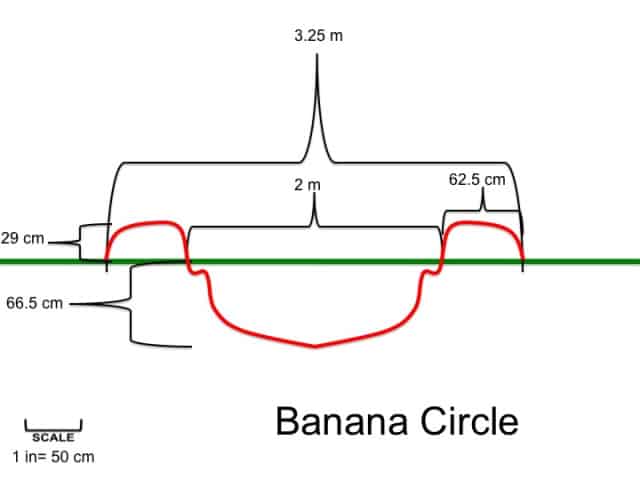 The earth that is dug is drug outwardly with hoes and shovel to form a mound more or less 2 feet wide.

This gives plenty of planting space for the bananas themselves and the subsequent guilds. The mound will support seven bananas equidistantly planted around the edge on top of the mound.

From there a myriad of plants can be inserted but the main ones used in this guild still are providing physical shelter, nutrients, assist in pest control, and reduce root competition.  This guild will also produce food and the other elements are in relative location to making it a synergistic little cultivated ecology.

outside of the mound as they can tolerate drier conditions. They are fast growing and can give some shelter while eventually providing a root crop yield while the systems is still young (plant and time stacking). This can be propagated by cuttings from other plants or sections of roots can be placed in the ground.

From there any of the tropical grasses (lemongrass, citronella, or

vetiver) are inserted on top of the mound in between the banana plants. These plants are then chopped and dropped to make mulch for the emerging system. This cycles energy through the circle absorbing what could be entropy from the emerging planting scheme. The strong scented grasses can also be part of the pest control and provide some low growing initial windbreak. These plants are easily propagated through root division by digging up a clump elsewhere and simply ripping the root mass apart, cutting the foliage back, and then replanting.

The following step involves planting a groundcover to help with

reducing root competition as tropical grasses and weeds will invade any newly disturbed space. Thus we like to use something fast growing like sweet potato slips. Alternatively or in combination could be peanut grass which an aggressive nitrogen fixer with beautiful yellow flowers. Both are propagated through cuttings or layering. Sweet potato slips can be purchased from markets as there are some varieties grown for the leaf and are extremely fast growing and are sold for their steamed green edibility. This will help mitigate the weed issue and also create more stable soil temps creating conducive conditions for growth.

house a number of different plant elements. The location lends itself to plants who like the wetter conditions.  For this we usually use wetlands plants such as taro or cana lily. They are both good biomass plants and can be used for food when the right cultivars are selected. They are planted densely around the inner terrace absorbing lots of nutrients and having access to the moisture pocket.
They are not pretty initially after the install but quickly take off from there. The inner circle should be mulched heavily and again the heap of organic material should form a convex shape. We often use large logs on the bottom for initial bulk and to provide a good fungal base and some aeration. Anything can be recycled and Mollison even suggests throwing in much of ones trash since that service is often limited in the tropics and can even be a resource in iron deficient soils. The mound itself should be mulched heavily in between the new plants to reduce weeds and retain moisture.

The mound will evolve quickly and excess banana plants (should only be grandmother, mother, and daugheter from each original plant) can be used as material to fill the depression. The circle design can also be used for Papaya or Coconut Palm. I have seen them bring together people of different cultures, house bats on their undersides, and delight children with their fruit. So I ask that you please incorporate these into your tropical Permaculture design so that the destructive paradigm of burning organic matter can be shifted and abundance can follow.