A Free App to Facilitate Barter

A Message from Zaia

In my search for local swap or LETS opportunities, I came across an app called SwapAnHour. I downloaded it on my phone and have made a private group called Noosa Swap. The app seems to function like a LETS system, where you swap an hour of your time for an hour of someone else’s time. It also allows you to lend items to someone else (or borrow something from someone). You can bank hours on the app and then pay for hours from your banked hours. I feel this is a great idea, especially with an economic downturn seemingly on the horizon. The LETS system is something which was promoted by Bill Mollison, and has successfully run in several places. Maleny is one such place and it is still going strong there. It will be so much easier to do it electronically now though.

The App is free and we can start our Noosa Swap, exchanging local services and goods.

Apps like SwapAnHour can overcome some of the limitations of traditional Barter (as outlined below).

Barter Systems don’t relieve us of our obligations to pay tax. For more information, click on this link: https://www.ato.gov.au/Business/GST/In-detail/Rules-for-specific-transactions/Barter-and-trade-exchanges/ This certainly does not mean that the LETS and similar systems are no good. It still means that you can access a service without having enough money, if you are willing to perform a service in exchange. So anybody who has a skill, even if it is very basic, has the ability to save up hours to spend later. We just need to make a record of the transactions and note the value in our tax returns. The app should make the record keeping pretty easy.

Here is some information copied from Wikipedia: In trade, barter (derived from baretor[1]) is a system of exchange where participants in a transaction directly exchange goods or services for other goods or services without using a medium of exchange, such as money.[2] Economists distinguish barter from gift economies in many ways; barter, for example, features immediate reciprocal exchange, not delayed in time. Barter usually takes place on a bilateral basis, but may be multilateral (i.e., mediated through a trade exchange). In most developed countries, barter usually only exists parallel to monetary systems to a very limited extent. Market actors use barter as a replacement for money as the method of exchange in times of monetary crisis, such as when currency becomes unstable (e.g., hyperinflation or a deflationary spiral) or simply unavailable for conducting commerce.

Economists since the times of Adam Smith (1723-1790), looking at non-specific pre-modern societies as examples, have used the inefficiency of barter to explain the emergence of money, of “the” economy, and hence of the discipline of economics itself.[3] However, ethnographic studies have shown that no present or past society has used barter without any other medium of exchange or measurement, nor have anthropologists found evidence that money emerged from barter, instead finding that gift-giving (credit extended on a personal basis with an inter-personal balance maintained over the long term) was the most usual means of exchange of goods and services.[4] 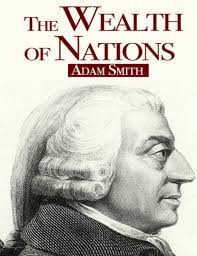 Adam Smith on the origin of money

Adam Smith, the father of modern economics, sought to demonstrate that markets (and economies) pre-existed the state, and hence should be free of government regulation[citation needed]. He argued (against conventional wisdom) that money was not the creation of governments. Markets emerged, in his view, out of the division of labour, by which individuals began to specialize in specific crafts and hence had to depend on others for subsistence goods. These goods were first exchanged by barter. Specialization depended on trade, but was hindered by the “double coincidence of wants” which barter requires, i.e., for the exchange to occur, each participant must want what the other has. To complete this hypothetical history, craftsmen would stockpile one particular good, be it salt or metal, that they thought no one would refuse. This is the origin of money according to Smith. Money, as a universally desired medium of exchange, allows each half of the transaction to be separated.[3]

Barter is characterized in Adam Smith’s “The Wealth of Nations” by a disparaging vocabulary: “higgling, haggling, swapping, dickering.” It has also been characterized as negative reciprocity, or “selfish profiteering.”[5]

Anthropologists have argued, in contrast, “that when something resembling barter does occur in stateless societies it is almost always between strangers.”[6] Barter occurred between strangers, not fellow villagers, and hence cannot be used to naturalistically explain the origin of money without the state. Since most people engaged in trade knew each other, exchange was fostered through the extension of credit.[7][8] Marcel Mauss, author of ‘The Gift‘, argued that the first economic contracts were to not act in one’s economic self-interest, and that before money, exchange was fostered through the processes of reciprocity and redistribution, not barter.[9] Everyday exchange relations in such societies are characterized by generalized reciprocity, or a non-calculative familial “communism” where each takes according to their needs, and gives as they have.[10]

Since direct barter does not require payment in money, it can be utilized when money is in short supply, when there is little information about the credit worthiness of trade partners, or when there is a lack of trust between those trading.

Barter is an option to those who cannot afford to store their small supply of wealth in money, especially in hyperinflation situations where money devalues quickly.[11]

The limitations of barter are often explained in terms of its inefficiencies in facilitating exchange in comparison to money.